In addition to the symptoms caused by GL-3 and lyso-Gb3 accumulation, activation of other pathways triggering inflammation may also contribute to the disease process and may be a driver of fibrosis and end organ damage.3,5-7

As a progressive, multisystemic disease, Fabry disease can1:

An individual with a gene mutation that causes Fabry disease

An individual without a gene mutation that causes Fabry disease

INHERITANCE THROUGH AN AFFECTED MOTHER3

There is a 50% chance that an affected mother with a heterozygous genotype will pass the defective gene to any of her children.

INHERITANCE THROUGH AN AFFECTED FATHER3 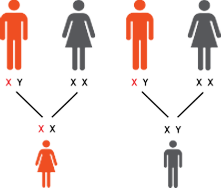 The daughter will inherit the defective gene from her father.

The son will not inherit the defective gene from his father.

The actual incidence of Fabry disease may be much higher.

Fabry disease has historically been estimated to occur in 1 in 40,000 to 60,000 live births.1 There were an estimated 16,688 cases of Fabry disease in 2017 spanning the United States, Germany, Spain, Italy, France, the United Kingdom, and Japan.8 The number of cases in those countries is estimated to continue to rise.8 However, newborn screenings suggest that Fabry disease may be much more common than these estimates.9

On average, each Fabry disease diagnosis leads to the diagnosis of 5 additional family members.10

Learn how Fabry
disease is diagnosed

You are now leaving the FabryFacts.com website. This link will take you to a site that is owned by Amicus Therapeutics.